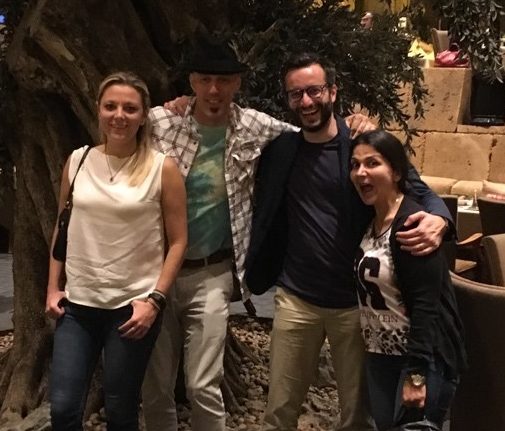 Four EMBA students, one Team Consulting Project.  Stephen Lile, Nada Chahadi, Cristina Savian and Enzo Lamberti (all EMBA 2016) worked together to develop eyeWit, a “Netflix-style” streaming news platform. In this first post, Stephen introduces the platform’s concept, and the importance of their trip to the American University of Beirut.

As many students and academics across Cambridge already know, I’ve been incubating a platform called eyeWit™ for a number years, which aspires to become a “Netflix style” streaming news platform on a global scale.

There are a number of technological and sociological antecedents that have triggered a “go time” for this platform, such as fake news proliferation. I also thought this platform would make a perfect Team Consulting Project for Cambridge Judge Business School’s Executive MBA programme.

To that end, an EMBA TCP was formed, including myself, Cristina Savian, Nada Chahadi, and Enzo Lamberti.

The process commenced with planning a working proof of concept (POC) that required the involvement of a small handful of institutions to help launch the network. One of our cohorts (Nada) hails from Beirut, Lebanon and suggested that we reach out to her alma mater American University of Beirut. Our goal was to share our vision of a global streaming news network, launched out of academia, and to essentially test the academic waters outside of Cambridge for interest in this platform.

Our trip to Beirut became the cornerstone of our TCP. We met with the American University’s professors of journalism and media. Needless to say, they were thunderstruck at the massive undertaking that we had proposed. They believed that AUB was unequally qualified as a host school for the POC given their nexus in Middle East/Asia, and the relatively peaceful coexistence of various religious and political factions.

They expressed their earnestness to join Cambridge at the ground floor of eyeWit…the Streaming News Network.

I had never been to Beirut. I was completely transfixed with the energy and warmth of the student body of AUB. Our entire team was unified in the thinking… AUB is the right place!

While walking the campus, I stumbled upon a student with a ukulele.  I asked him to play. For a moment, I thought I was on the campus of UCLA, not AUB.

He wrote this song. His spirit really captured my heart.

He asked if I played. So, I attempted (and failed) to match his skills. But it was such a magic moment.

Unquestionably, we’re learning that the world is searching for credible news from a fresh source. These videos demonstrate how small and interdependent our world has become. This video could have been taken in Southern California. Instead, it comes from a small country that has emerged from an horrific civil war and sectarian strife. If I ever wake up feeling there’s no hope for this world, I will replay these two videos.